Kings of Comedy aim to showcase rising stars of comedy with support from professional comedians. Presented each week by Simon Hughes (the man behind KOC).

What people are saying about us:

‘A great event if you’re unfamiliar with the comedy world. ★★★★‘  Mojo News

‘Stop bugging me for a review.’  Dave O’Neil

‘Welcoming staff and always a great line up. We go here often and haven’t been disappointed yet.  ★★★★★’ Joanne M

‘Amazing atmosphere, amazing food and drink, amazing service and topped off by an amazing Comedy Show. I have recommended this place to all my family and friends. ★★★★★’ Hemaima R

‘This is a matter for the courts now.’  Bob Franklin

‘The Kings of comedy show was excellent. Service was great. ★★★★★’ Skye H

“Have been a massive fan of stand up comedy for my whole life but had never checked out local comedy because I assumed it’d be pretty sh#t. I am so glad I came out tonight. The whole line up was outstanding and I didn’t stop laughing. I will 100% be checking it out again” ★★★★★ Melissa V

‘Was a great night out! Had a lot of laughs with Kings of Comedy, the MC was amazing! Will be back for sure!’  ★★★★★ Brittney A

A little more about Simon from the media:

The Two of Us (Sydney Morning Herald) 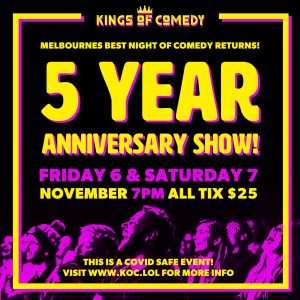 Are you organising a function and in need of entertainment? Kings of Comedy have you covered!

Join our mailing list today to be the first to know about our special offers and headline acts!